The Bond of Ponder ISD 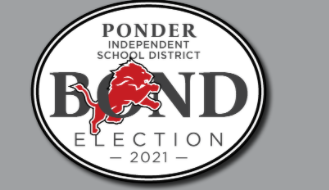 The Ponderisd district has decided to enhance our schools by using a bond of 75 million and make a new high school to go with the package. The bond election will take place on May 1st, however, early voting was taking place. First, is the biggest change, or addition: The high school. The high school will include new classrooms tailor-made for some of the upcoming extracurriculars, including but not limited to, shops, agriculture, and Career and technical education will have new classrooms. A Black box Theatre and an improved fine arts building will be included. They are also adding renovations to the current schools and changing stuff around them. While the elementary will stay the same, the junior high will become an early learning center. Thus the high school will become the new junior high. The additions to the old buildings are mostly stuff like new fire alarms, better plumbing and electrical, new looks and fixing up walls and roofing, and better lighting will be included as well. This all has a downside. The bond says a lot of taxes will not go up in building and renovating, but after this, there will need supplies, which cost money, and maintaining and repairing the building won’t be good. The building will have to be done quickly because of the school year, which will hurt the quality and possibly cause problems later down the road. We encourage all people to vote and hear your opinions on what to do with our school. Hopefully, the future is bright for Ponder ISD.